JOIN US FOR A TROON WEEKEND CLASSIC DOUBLE LINE UP 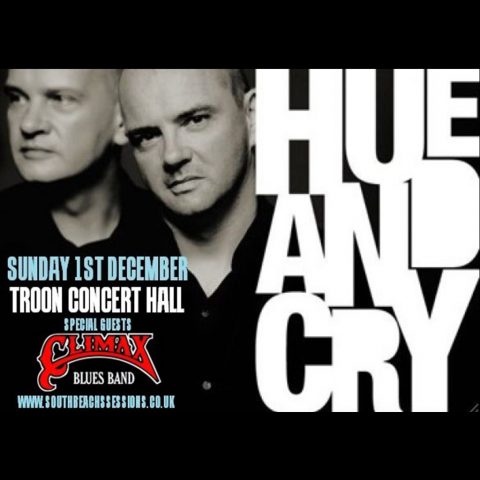 The event takes place at Troon Concert Hall in Ayrshire on Sunday 1st of December. It follows on from an already packed St Andrew’s weekend of live music at the venue which is hosting, the annual international Classic Rock festival, WinterStorm.

Hue and Cry Labour of Love

Brothers Patrick and Gregory Kane formed Hue and Cry in 1983 and the duo made a huge impact in the late 80’s with the albums ‘Seduced and Abandoned’ and ‘Remote’ as well as massive hit singles such as ‘Labour of Love.’ Albums like ‘Stars Crash Down’ and ‘Jazz Not Jazz’ ensured Hue and Cry’s continued triumph in the 1990’s, whilst the release of the hugely applauded ‘Open Soul’ in 2008 brought them firmly back into the limelight.

2019 signals the 30th anniversary of the seminal Hue and Cry album ‘Remote’. Released to not only huge acclaim but to multi-platinum success, spawning the singles ‘Ordinary Angel’, ‘Violently’ and ‘Looking for Linda’. There’s little doubt that these fan favourites will be in the set at Troon along with live picks from three decades of back catalogue.

The band has sold tens of thousands of concert tickets worldwide, as well as performing alongside some of the greatest artists in music history, appearing with U2, James Brown, Madonna, Al Green and Van Morrison to name but a few. The duo was recognised by their peers when they were presented with the Lifetime Achievement Award at the Scottish Music Awards.

Hue and Cry will be performing with the full band at Troon Concert Hall (as opposed to the acoustic duo) and will be supported by the incomparable sound of Climax Blues Band.

Climax Blues Band were scheduled to play Troon earlier in the year and rather than losing the booking it was decided to put them together with Hue and Cry for an eclectic night of soulful tunes and harder blues rock.

2019 saw the release of Hands of Time which is the 21st album by Climax Blues Band and is a mixture of bluesy funk, soul and jazz rock, all of the ingredients that have kept the band working for over 50 years. The album has a fresher more modern feel to it than on previous releases and is being well received on the live dates by fans old and new.

Gig-goers can expect a great night of live music spanning almost half a century from two superb musical acts.

Tickets for the event are on sale at www.southbeachsessions.co.uk and Skiddle and also can be purchased at The Harbour Bar in Troon. There are a very limited number of balcony seats available – downstairs will be standing only.

South Beach Sessions have been promoting a wide range of live music in and around Ayrshire over the past five years.

Troon Concert Hall provides a superb venue for a variety of live music offering a traditional standing area downstairs and seated balcony above. The capacity of 850 provides for a superb atmosphere and is complemented by professional bar and catering provided by the team from The Harbour Bar in Troon.

The Hue and Cry gig is being held on the same weekend as the sold-out WinterStorm rock festival so the full sound and light rig will add to the experience. Doors will open at 6:00 pm for this gig as it’s a Sunday night.