It’s the late 1960s….one wouldn’t normally associate the town of Stafford with authentic blues, certainly not for a band of young lads – although already experienced players – showing an extraordinary flair of musicianship summarised by the debut 1969 LP ‘The Climax Chicago Blues Band’, recorded at Abbey Road for EMI’s Parlophone label. Climax was formed by Colin Cooper and Pete Haycock from the ashes of Gospel Truth and Hipster Image which had set the local soul and R&B scene, but they really found their home with a change of direction to blues. Bassist Derek Holt was also an original founder member.

However, their second album ‘Plays On’ shot off in many directions (some of them bewildering) which revealed that they were far more than a blues band and a precedent was set for a band that would use the blues as a base, but carve their own style drawing on many influences along the way. Indeed, the ‘Blues Band’ part of the name was dropped for the next couple of albums.

Climax Blues Band Line up
It wasn’t until the album “Rich Man’ in 1973 that the band settled into a line-up which became permanent through the rest of the 70s and early 80s, comprising of Colin Cooper (saxes, harmonica and deep down vocals), Pete Haycock (guitars and vocals), Derek Holt (bass guitar and high-end vocals) and John Cuffley (drums and percussion).

‘FM Live’, released as a single LP in the UK and a double in the States in 1974. It was a fantastic night at New York’s Academy of Music, captured as a live broadcast and its release was a real turning point for the band.

‘Sense Of Direction’ was the next studio album and then in 1975 ‘Stamp Album’ saw the return of keyboard player Richard Jones who had been involved right at the start of the band.

Climax enter the US Billboard Chart and UK Top Ten
Momentum still building in the States, 1976 saw the release of ‘Gold Plated’. The album stayed on the Billboard chart for 44 weeks, and the hit single ‘Couldn’t Get It Right’ peaked at number 3 in early 1977 having reached the Top Ten in the UK in the Autumn of 1976. With the band firing on all cylinders as a five-piece unit the sound on ‘Gold Plated’ was slicker and smoother, but still retaining an edge. ‘Couldn’t Get It Right’ with its immediate hooks in the chorus and the guitar/sax runs couldn’t fail to impress and it became the song that music fans all over the world loved and brought the name Climax Blues Band to a new level.

The next Climax album was ‘Shine On’. Richard Jones had left the band and was replaced by Peter Filleul on keyboards.

In 1979 Climax recorded ‘Real To Reel’ in Montserrat, the first band to use the recording studios there. ‘Flying The Flag’ was released in 1980 and the first single ‘Gotta Have More Love’ dented the charts in the UK and US. Pete Filleul had left the band and Nicky Hopkins took over keyboard role on this and the next album. A rich variation of styles filled the album, and the song that hit the heights in America was ‘I Love You’. Written and sung by Derek Holt, it was an instant hit and the perfect wedding song to this very day, much in demand. Sadly it provided a rift between band members as it was seen as unrepresentative of the Climax sound.

George Glover, New Keyboard Player
George Glover joined the band on keyboards and backing vocals on tour promoting the ‘Flying The Flag’ album and has remained there ever since. George’s colourful background included playing the famous Star Club and Top Ten Club in Hamburg at the same time the Beatles were out there and eventually moving there in the mid-60s. Returning to England to join the Cyril Dagworth Players with David Parton, touring and playing on his hit single ‘Isn’t She Lovely’.

The 1982 album ‘Lucky For Some’ was the last to feature the Cooper / Haycock / Holt / Cuffley line up which had been together for nine years. Derek Holt was soon to leave the band and then John Cuffley also moved on.

In 1984 the album ‘Sample And Hold’ was released on Virgin, the nucleus of the band being Colin Cooper, Pete Haycock and George Glover with session players on drums and bass. On tour the rhythm section comprised of Jeff Rich and John ‘Rhino’ Edwards, who eventually went on to feature in Status Quo for many years. In 1985 Peter Haycock left the band to pursue a solo career.

Roy Adams & Neil Simpson Complete New Line-up
After a short period of introducing new rhythm sections, Birmingham drummer Roy Adams and then Neil Simpson on bass guitar completed the Climax line-up in the early 90s. Roy had played and recorded with Ruby Turner, Steve Gibbons and Roy Wood and Neil had also worked with Ruby Turner and Roy Wood, as well as John Mayall’s Bluesbreakers. As a unit, Roy and Neil have certainly continued the Climax tradition of creativity in the backline, Roy’s drumming, in particular, being supremely powerful in the attack on the up-tempo numbers without losing the genuine blues feel.

Colin had steered the band back towards the original authentic blues approach and this is evident on the 1993 live album ‘Blues From The Attic’ which was an outstanding representation of the live act since the band reformed in 1986. Throughout their career Climax only released the two live albums but both were pivotal in their career. ‘Blues From The Attic’ re-established their position as a band of the highest blues quality.

To prove that Climax was not just the ‘real thing’ in a live context, they recorded their first studio album in 17 years in 2003. Consisting totally of Willie Dixon songs, ‘Big Blues’ has a youthfulness which shouts out the pleasure the band obviously had in returning to the craft of studio work, easy to compare it to the 1969 debut Climax album for exuberance.

Colin Cooper Passes the Mantle
Climax promoted the album throughout the UK and Europe but the rate of gigs slowed down when Colin fell ill and despite a courageous battle against cancer he died in July 2008. The shock of Colin’s death naturally left the remaining members of the band reeling and fulfilling his wishes for them to carry on was a very hard situation to come to terms with, how to replace Colin Cooper.

In 2009, Johnny Pugh joined Climax Blues Band as vocalist, sax and harmonica player and brought a tremendous amount of quality to the band, leading very much from the front but unfortunately, his enforced retirement from the music scene meant his stay was short-lived.

Graham Dee & Chris “Beebe” Aldridge Complete the New Line up
In 2012, Graham Dee was recruited to front the band. With his own distinctive style and a pedigree on the blues scene which included performing with The Blues Collective, The Red Lemons and joining ex-Feelgoods in The Lone Sharks as well as session vocals and voice coaching. At the same time, Chris ‘Beebe’ Aldridge took on the saxophone duties with a fresh and exciting dynamic sound, both adding their own dimensions to the musicians that have carried the flag for Climax as a unit for over 20 years, in Les’s case over 30 years and George for nearly 40 years.

Lester Hunt retires and Dan Machin Assumes the Mantle
After 36 years, guitarist Lester Hunt sadly announced his retirement from the band due to health reasons and Climax had no hesitation in recruiting Dan Machin on guitars. Dan had worked with Lester from the age of 16, had followed Climax as a fan and played in various other bands with Roy and Neil along the way. He had already covered for Les at gigs where Les was unable to play and it was apparent he was able to smoothly step into the band as an accomplished and supremely talented guitarist.

With the 30-year experienced bedrock rhythm unit of Adams and Simpson, Climax veteran George Glover holding everything together from the keyboard stand as band leader, the dynamic Beebe and Graham, as well as the ‘new blood’ of creative guitarist Dan. A new chapter of Climax Blues Band is here, creating new music, flying that flag in 2022, moving forwards, blending the old with the new, and loving making music.

A brand new album of original songs is being written to build on the success of Hands Of Time. 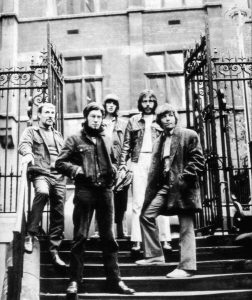 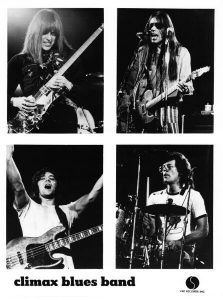 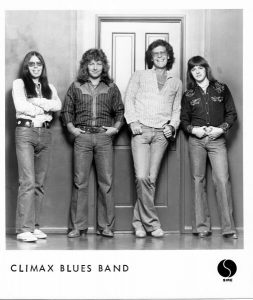 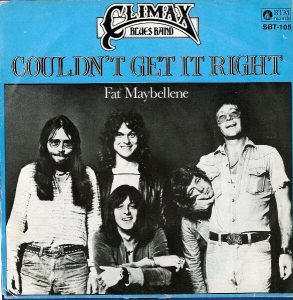 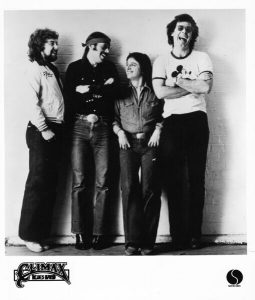 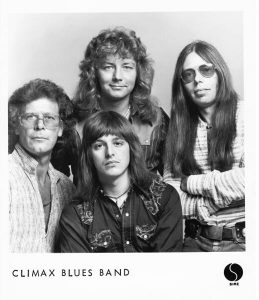 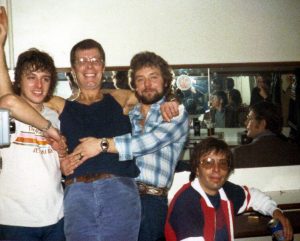 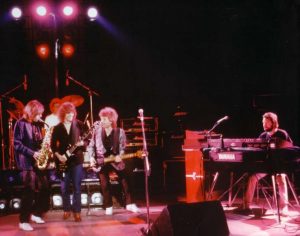 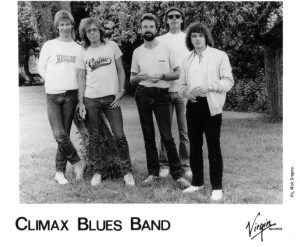 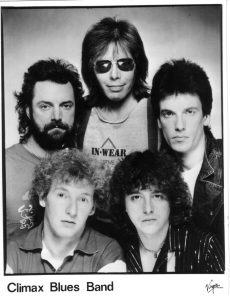 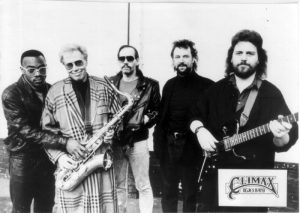 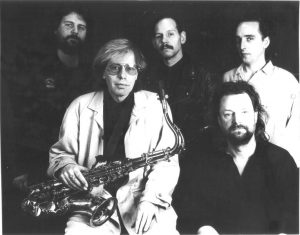