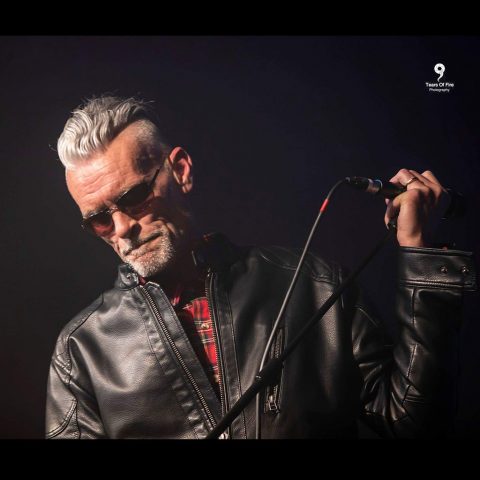 I was absolutely blown away last night at HRH Blues by the performance of Climax Blues Band – just stunning for me.

Here’s a quick shot of their enigmatic front man Graham Dee who was just superb not only with the vocals but also with his work with the crowd, great performance all round. Shooting for Rockposer.com with many thanks as always to Toby and the HRH.

Review by Tears of Fire

I hear time and time again that this is just a tribute band not one original member, well let me end this argument:

George Glover keyboards has been in the band since 1981, now if you’ve been in a band for thirty-eight years how can it be a tribute? Also guitarist Lester Hunt has been with them since 1986, I think that settles it don’t you? If you want bands with no original members, look at Quiet Riot and Yes.

When these guys hit the stage the first thing you notice is the formidable figure of the charismatic lead singer Graham Dee, then I see the first saxophone of the day held by Chris Aldridge followed by guitarist Neil Simpson and the man at the back-drummer Roy Adams. They were going to be showcasing songs from their newly released album Hands of Time, which has amazed them how popular it has been in such a short time: No 1 in all kinds of charts. The title also reflects the passing of former leader, Colin Cooper.

Climax is the “coolest and most laid-back band”

Graham with his husky baritone voice immediately sets the mood and the whole hall takes on a totally different atmosphere: no twelve-bar blues here, just an incredible mix of slow funky jazzy numbers that have the audience’s heads swaying from side to side and just disappearing into their music.

Their first song “Straight Down the Middle” with the funky sound of both guitars followed by a great sax sound, Graham oozes funk and soul out of every pore pulling some of the best faces and moves. The versatility of Graham and his perfect phrasing: he is born to sing this type of music, he doesn’t hog the stage either; many times in the set slipping off side stage and letting all the musicians demonstrate their solo skills.

The title track “Hands of Time”, a beautiful key intro from George and a clarinet solo from Chris takes you to a musical dreamland, “Last Chance Saloon” which Graham dedicates to everyone here tonight more up-tempo number but still that brilliant vibe. Graham also treated us to a wonderful version of the Willie Dixon classic Spoonful; sitting down on the edge of the stage serenading the crowd with his husky tone, then it changes into a rock and roll arrangement which has the audience jumping and jiving. Ending the night with their classic “Couldn’t Get It Right” with the whole audience joining in.

These guys were the coolest and laid-back band here and probably on the planet: I loved them, and so did everyone else.