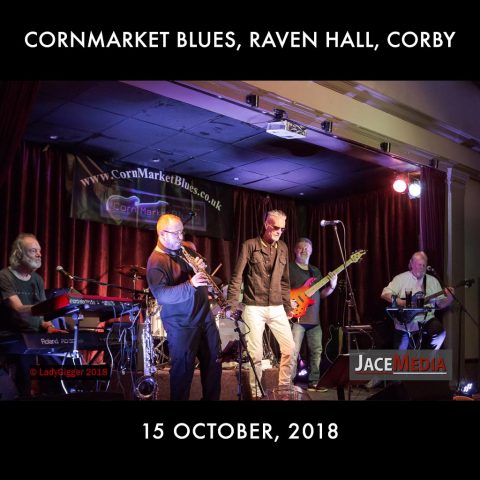 Welcome to CornMarket Blues for another night of classic blues and blues rock organised by promoters, Dave Morse and Richard Boyles.

The headliners tonight needed no introduction The Climax Blues Band have been around now for half a century in one incarnation or another playing blues in their own inimitable style. The band are now the two long surviving members George Glover Keyboards, and Lester Hunt guitar, Neil Simpson bass, and completing the line up the two newest members Chris “Beebe” Aldridge and the charismatic vocalist Graham Dee. Graham immediately apologising for not having the new album available for sale due to powers beyond their control but promised to all the audience that they would be first to receive it after leaving their email addresses after the show, a lovely thing to do guys. They were also along with many oldies were going to be playing most of the songs from the new album Hands of Time. Their new material is more soul and funk in my opinion rather the blues, but it still didn’t take away any of the musicianship from the individual performers, Graham forever air guitaring or keyboard mimicking the band all night, Graham’s personality and stage presence is brilliant a slice of comedy along with a voice to die for: he will keep this band going for many more years to come I’m sure. He didn’t take over the stage either as many front men do, he stepped back a few times to show off the talents of both Lester and a wonderful keyboard solo from George, falling in love with the smell of a towel as he mopped his brow and asking the audience if they wanted to sniff it was just great to witness and his interaction with the audience all night was pure professionalism. The encore was always going to be Couldn’t Get It Right, which was made even more entertaining by the courage of thirty year old Harry who approached the stage and sang the words perfectly in a mini duet with Graham and the way he smiled and looked at the young man said it all, yes the band may have been around for years but the appeal for both young and old is still obviously apparent. The band are headlining HRH Blues in April next year at the O2 Academy Sheffield and I look forward to seeing them again.

Review by Dave Martin & pics by Carol Henson (aka LadyGigger).