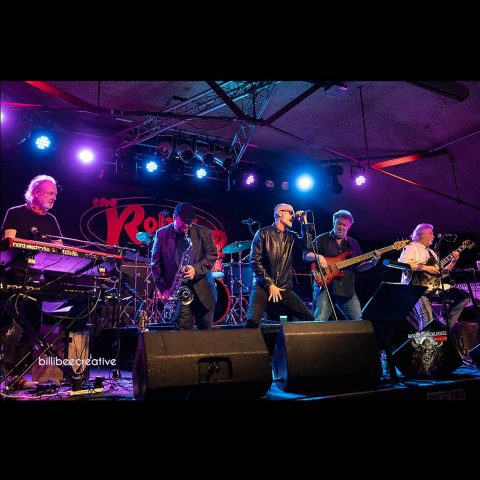 Whatever your mood, there’s something about Climax Blues Band music that makes you feel ineffably good.

I know this because, as I enter having already missed one song, I’m still not in the slightest bit angered or incensed. These days, early starts at music venues (an increasing phenomenon here in the Midlands) have become something of a bone of contention for me: many’s the time I’ve walked into a venue at a respectable 8pm only to find the headliner’s been onstage for half an hour already, and bloody infuriating it is too. However, tonight, it really doesn’t matter: not because I’m indifferent in any way to what the opening tune might have been (far from it in fact) but thanks to the relaxed, warm, funky glow that oozes over me the second I cross the Robin’s hallowed portals.

Funky, of course, being an operative word where CBB are concerned. Despite having begun life in nearby Stafford as the “Climax Chicago Blues Band” in 1967, and releasing a sequence of early albums consisting largely of psychedelic variants on that style (see also Peter Green’s Fleetwood Mac, Chicken Shack, Savoy Brown, Taste, Ten Years After, Keef Hartley, Jellybread, John Dummer Blues Band, Bakerloo, Brunning Hall Sunflower Blues Band etc) they technically haven’t been a “pure” blues act per se since 1976, when Couldn’t Get It Right (one of the finest white funk records ever, alongside AWB’s Pick Up The Pieces and Stretch’s Why Did You Do It) smashed charts both sides of the Atlantic and rode the twin waves of American AOR/yacht rock (Boz Scaggs, Toto, Player, Jay Ferguson, REO Speedwagon, Chicago, Exile, Hall & Oates) and British pub jazzfunk disco crossover (Gonzalez, Clancy, Kokomo, Hi Tension, Muscles, Moon, Kandidate, Honky, Morrissey-Mullen, Olympic Runners)

With the that particular era’s lineup spending far more time in the US anyway, the timing was perfect: cleverly tapping into the drivetime sounds of FM radio and the boogie shoe grooves of clubland, they looked poised for all of five minutes to become one of this country’s biggest exports, and though it ultimately didn’t quite happen, their fierce determination has kept them on the road ever since, layering the same mixture of melodic rock, jazzy R’n’B and badass funk over an ever-recognisable blues-based foundation. It’s a noble calling, and one from which not even the absence of any original members has held them back: with last surviving founder Colin Cooper having both retired and died earlier this decade, the band are now ably led by keyboardist/principal songwriter George Glover (a member since 1980) while added assistance is provided by guitarist Lester Hunt and drummer Roy Adams (both present since 1985) and bassist Neil Simpson (joined 1991)

Meanwhile, out front, we have two relatively new recruits (at seven years service) in the shape of sax maestro Chris Aldridge and vocalist Graham Dee: more importantly, we have a superb new album at our disposal in the shape of Hands Of Time, and it’s this waxing they’re primarily here to promote. As a result, anyone expecting to hear a set of old trad Climax favourites will, I won’t lie, invariably be disappointed: sure, they’re dotted about the set in the shape of Louisiana Blues, Fool For The Bright Lights and the robust Willie Dixon classics Seventh Son and Spoonful, but as the aim of this tour is to present Climax 2019 as a relevant, ass-kicking modern-day outfit, it’s only natural they should wish to display their fine new wares too.

And to that end, seven fresh cuts (the setlist says eight, but time constraints force one or two changes) are laid on the slab for our delectation: of these, the mean and moody 17th Street Canal is undoubtedly the best, a slice of misty urban “murder rock” set at the lower end of Dee’s vocal range that whilst reflects the band’s Black Country roots as much as any American influence, although it’s closely rivaled by set-closer Wrong Time, a real stomper which manages to blend the reggae chops of The Police, the slight New Wave-isms of early 80s Kinks and the raucous blues-pop of Huey Lewis in equal measures with some quintessentially British lyrical sarcasm. “I kept my head above the water”, emotes the bequiffed frontman, “while yours was shoved right up your arse”. Smooth.

Hard Luck, meanwhile, is probably the tune towards which fans of a more traditionally-minded 12-bar boogie bent will gravitate, while for soft-rockers everywhere, What’s Your Name is probably closest in sound to the ‘yacht’ period: moderately reminiscent, in fact, of their aforesaid big hit, which finally makes its welcome and well-timed appearance in the middle of the second set. These days, it’s prefaced by a beautifully deconstructed downtempo crooning intro from Dee before launching into That Riff and That Rhythm: as one would expect, spontaneous dancing suddenly erupts around the room, but even so, the appreciative response accorded throughout the show reminds us Climax have always been about more than one song.

Dee himself seems a lot more confident now than when I last caught the band at London’s 100 Club: yet whilst the band seem to have found in him (after a brief false start) the ideal replacement for the departed Cooper, the star of the show, and the anchor of the band, is undoubtedly still Glover. His tickling, tinkling choice of Hammond, Rhodes and synth tones are undoubtedly the foundation upon which the Climax sound proper is built: his interpolations with Walsall-born saxist Aldridge (yep, another one of those blokes who’s very nearly named after the town he grew up in) on early 80s classic Last Chance Saloon and the ultra-slinky Hands Of Time itself are pure aural delight, calling to mind at several junctures the work of the highly-underrated Gino Vannelli.

The introduction of stricter curfews at the Robin mean there’s sadly no time for the proposed encore, which should have consisted of Towards The Sun and Going To New York- but even without those two further trips down memory lane, Climax ultimately succeed in their aim tonight. Much merchandise is sold, and other than the two grumpy sods who walk out during the interval (you always get them, in fact I’ve been attending gigs since 1986 and I’m now starting to think they’re the actual same blokes every time) approval throughout the 150-200 crowd is unanimous. Now in the band’s 50th year, and with Glover himself now into his 70s, they still evidently have a struggle ahead: they may not pull as many to each gig as their old touring mates Dr Feelgood, but on the other hand at least they’ve bothered to write and record more than one new studio album in the last two decades. And personally, despite what certain other embittered ex-members might say, I think both Colin and Pete would thoroughly approve. From here, that long, dark and lonesome road so beloved of bluesmen everywhere can only reach upwards.