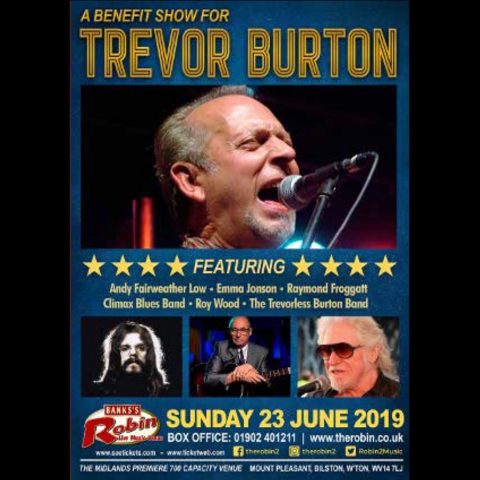 Founding member of Amen Corner, Welsh singer-songwriter Andy Fairweather Low, is an indication of the pedigree on display and starts proceedings with a string of classics like the skiffle standard Putting on the Style, Wide Eyed and Legless and (If Paradise Is) Half as Nice that have the sizeable crowd joining in, in a spirit of camaraderie from the off.

Trevor Burton former member of The Move, ELO and Wizzard

The man the BBC described as being “responsible for some of the most memorable sounds of the Seventies” and a former member of The Move, ELO and Wizzard, Roy Wood, sits comfortably in this austere company with a clutch of mammoth hits in a musical sojourn through his immense back catalogue. Ball Park Incident, Fire Brigade, I Can Hear the Grass Grow, Flowers in the Rain, See My Baby Jive, Blackberry Way and an unseasonable I Wish It Could Be Christmas Every Day provide enough anthemic singalongs to sate the crooners in the crowd.

There is little let up as The Climax Blues Band storm through a smorgasbord of down and dirty, sleazy blues like Ain’t That A Kick in the Head, Straight Down the Middle and Hard Luck while a poignant and fitting finale from The Trevorless Burton Band brings proceedings to an end with some traditional blues numbers, the highlight of which is a storming rendition of JJ Cale’s Call Me The Breeze.

A fantastic night of top-notch rock and blues from the old-guard who turned out to provide not only monetary support but the kind of emotional fillip that Trevor Burton requires in these troubled times. A friend in need…