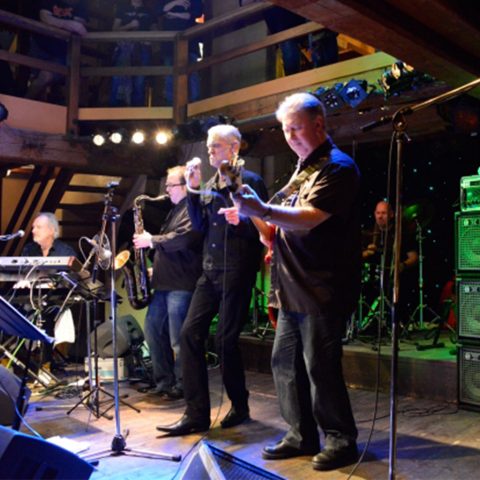 One of the country’s longest serving blues bands, returned to raise the rafters of the Lichfield Guildhall when The Climax Blues Band appeared.

With a history dating back more than thirty years, the Climax Blues Band marked their territory early on, with two Willie Dixon songs. ‘Seventh Son’ and ‘Down in Louisiana’ were tight, funk based readings, and allowed for some fine singing from vocalist Graham Dee, and soloing from guitarist Lester Hunt and saxophonist Chris Aldridge (aka Beebe), with strong support from keyboard player George Glover, bassist Neil Simpson and Drumer Roy Adams.

Although the band’s repertoire comes mainly from the blues, the tight unison playing on saxes and guitars, also betrayed the influence of jazz, a well as a definite rockier edge in such songs as ‘Fool for the Bright Lights’ and ‘Chasing Change’. Lester Hunt led the band through a blues rock ‘Take me back to Georgia’ whilst ‘So Many Roads’ was a slow blues which allowed for a show stealing Saxophone solo that was both technically demanding and also full of soul. The first half finished with a third Willie Dixon song, with a jump-jive reading of ‘I’m Ready’.

The pace was lifted during the second set, with a far more responsive audience being treated to livelier than usual versions of ‘Little Red Rooster’ and ‘Spoonful’ both blues standards that can drag in the hands of lesser blues bands, or be treated with far too much reverence. The band got the hands dirty with both songs. They showed their slow blues credentials with ‘Last Chance Saloon’ whilst the pace really lifted during ‘Couldn’t get it right’ the song’s mix of a catchy beat, and road won musicianship providing the band with their best known song to date. After this it was a straight home run with ‘Towards the Sun’ and ‘Let the Good times roll’ which was packed full of high quality musicianship, and a very deep groove. An encore of ‘Going to New York/Money’ was a rousing finale to a very memorable night at the Guildhall.