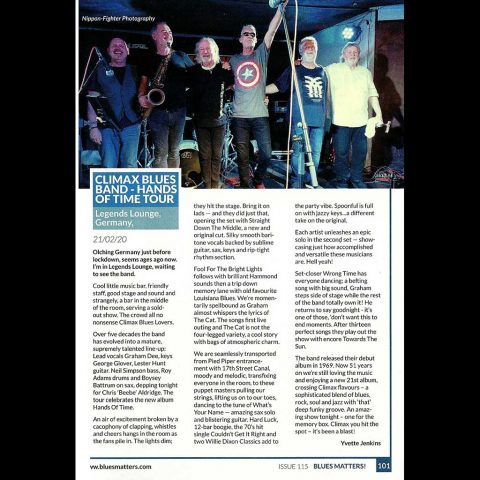 Cool little music bar, friendly staff, good stage and sound and strangely, a bar in the middle of the room, serving a sold-out show. The crowd all no-nonsense Climax Blues Lovers.

An air of excitement broken by a cacophony of clapping, whistles and cheers hangs in the room as the fans pile in. The lights dim; they hit the stage. Bring it on lads – and they did just that, opening the set with Straight Down the Middle, a new and original cut. Silky smooth baritone vocals backed by sublime guitar, sax, keys and rip-tight rhythm section.

Fool For The Bright Lights follows with brilliant Hammond sounds then a trip down memory road with old favourite Louisiana Blues. We’re momentarily spellbound as Graham almost whispers the lyrics of The Cat. The song’s first live outing and The Cat is not the four-legged variety, a cool story with bags of atmospheric charm.

We are seamlessly transported from Pied Piper entrancement with 17th Street Canal, moody and melodic, transfixing everyone in the room, to these puppet masters pulling our strings, lifting us on to our toes, dancing to the tune of What’s Your Name – amazing sax solo and blistering guitar. Hard Luck, 12-bar boogie, the 70’s hit single Couldn’t Get It Right and two Willie Dixon Classics add to the party vibe. Spoonful is full-on with jazzy keys… a different take on the original.

Each artist unleashes an epic solo in the second set – show-casing just how accomplished and versatile these musicians are. Hell yeah!

Set-closer Wrong Time has everyone dancing; a belting song with big sound, Graham steps side of stage while the rest of the band totally own it! He returns to say goodnight – it’s one of those, ‘don’t want this to end moments. After thirteen perfect songs, they play out the show with encore Towards The Sun.

The band released their debut album in 1969. Now 51 years on we’re still loving the music and enjoying a new 21st album, crossing Climax flavours – a sophisticated blend of blues, rock, soul and jazz with ‘that’ deep funky groove. An amazing show tonight – one for the memory box. Climax you hit the spot – it’s been a blast!