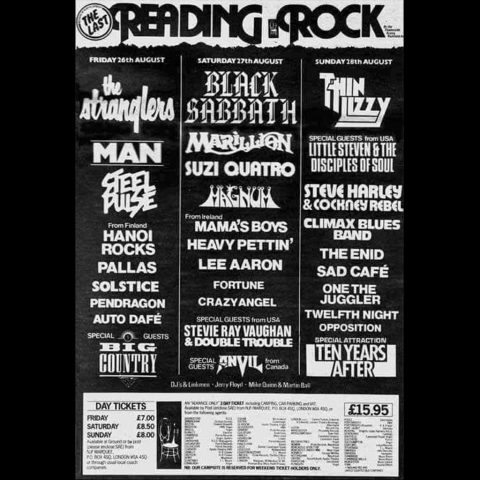 Climax Blues Band performed on the last day of the 3-day Reading Rock festival. Below is an extract from a review of the event that included Thin Lizzy.

The last Reading Rock held at the Richfield Avenue site. The local council decided that it would be a good idea to redevelop the site and unceremoniously kicked the rock festival bods off without providing a new venue- spoilsports!

This last festival featured one of the potentially better lineups of the 80s, certainly, the lineup was more varied than it had been for years, with reggae from Steel Pulse, classy Hendrix-styled psych blues from Stevie Ray Vaughan and a dose of new wave rock from The Stranglers.

The old school was represented by Suzi Quatro, Black Sabbath, with Reading fave Ian Gillan in place of uncle Ozzy on vocals. Reading 83 was also notable for the last ever festival performance by Reading institution Thin Lizzy.

Although this was by no means the classic and highly potent Lizzy of the mid to late 70s, the crowd were kind and gave Lynott and co a highly emotional sendoff, as they knew this would be the last time that the boys WOULD be back in town…

The weather was warm all weekend, but the welcome wasn’t warm for Steel Pulse. They were bottled by a biker element in the audience and were forced to retire early into their set … not the first time this had happened to a reggae act at Reading, this had occurred back in the mid-seventies when Mighty Diamonds and Uroy were bottled and subject to racist taunts by a section of the audience in 1976.

Saturday night was notable for the inclusion of Black Sabbath’s monolithic Stonehenge set, the band dwarfed by 45 ft high henge slabs which took up much of the stage – apparently, this was the inspiration for Spinal Tap’s ludicrous stage set . However, Hawkwind had done something similar ( but on a smaller scale, the Sab’s set filled three semis) in the 70s with their “Atomhenge” backdrop.