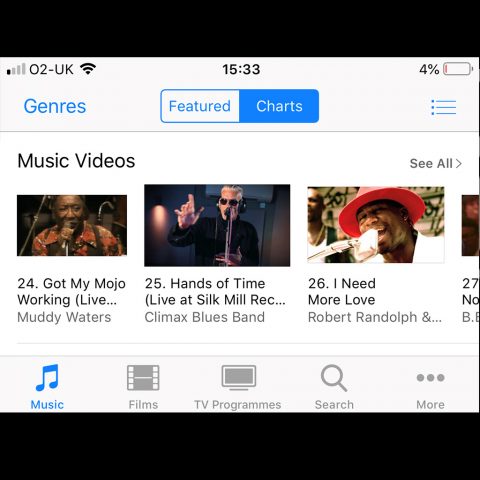 Climax Blues Band is delighted to report that “Hands of Time” is currently number 25 on the Apple iTunes Blues Video chart!

Yes, the title track off our new self-titled album released this year is currently number 25 on the Apple iTunes Blues Video Chart.

Hands of Time is the 21st album by Climax Blues Band, consisting of 13 new original songs, plus a bonus unreleased track ‘Getting There’ with the late Colin Cooper.

It was recorded at Silk Mill Studios in Staffordshire, UK and is a mixture of bluesy funk, soul and jazz-rock, all of the ingredients that have kept the band working for over 50 years.

The album has a fresher more modern feel to it than on previous releases and is being well received by the industry. You can hear a selection of the new songs played live by the band when they embark on their major UK & European tour starting in 2019 to promote the album’s release.

Colin was the founder member of Climax Blues Band back in 1968 and led the band with Pete Haycock through great success and recognition through the 1970s and 1980s, with huge selling albums like FM Live and Gold Plated, hit singles Couldn’t Get It Right and I Love You.

George Glover joined the band on keyboards in 1981, Haycock left in 1984 and Lester Hunt came into the re-vamped Climax in 1985, Roy Adams joined in 1987 and Neil Simpson in the early 1990s. Colin Cooper was leading the band with a return to the kind of blues that got the band started before his untimely death. His wish was the for the band to continue and the recruitment of Graham Dee and Chris ‘Beebe’ Aldridge was made with a view to broadening the Climax sound again and take on new musical influences, move forward creatively which was the Climax Blues Band trademark, rather than rely on the past glories.

The live album Security Alert was released in 2015 and reflected this move forward and the fact that Climax were delighting old and new fans alike throughout the UK and Europe. Roy Wood of ELO and Wizzard fame mixed the live album.

Graham Dee as a focal point is a larger than life frontman who holds the audience in the palm of his hand. His amazing vocal range sets him apart from the field and he is quite happy to go walkabout in the audience to spread the joy…. Chris Aldridge is more laid back and does his talking with his outstanding virtuoso sax playing, easing through soul, jazz and blues influences with great style.

With the 30-year experienced bedrock rhythm unit of Adams and Simpson, Climax veteran George Glover holding everything together from the keyboard stand as a bandleader, and Les Hunt’s supreme guitar skills transcending all the musical areas Climax find themselves in. Hands of Time pulls all this together and makes a firm statement of intent: Climax Blues Band are very much still proudly flying that flag in 2019, moving forwards, blending the old with the new, and loving making music.