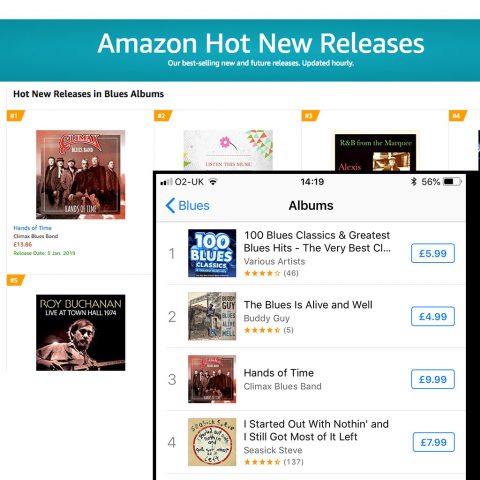 Hands of Time album #1 on Amazon and #3 on iTunes

Climax Blues Band are delighted to announce that their new album “Hands of Time” went number one on Amazon and number 3 on iTunes!

‘Hands of Time’ is the band’s 21st album, consisting of 13 new original songs, plus a bonus unreleased track ‘Getting There’ with the late Colin Cooper. It was recorded at Silk Mill Studios in Staffordshire, UK and is a mixture of bluesy funk, soul and jazz rock, all of the ingredients that have kept the band working for over 50 years.

This solid unit has flown the Climax flag with tremendous passion and style. Now there is a spring in their step, taking the band forward and already pleasing crowds throughout Europe, the ‘seamless’ transition in carrying on creating the unique Climax sound is the result of hard work, disguised by a band having a great time making music. Graham Dee was recruited in 2012 to front the band. With his own distinctive style and a pedigree on the blues scene which included performing with The Blues Collective, The Red Lemons and joining ex-Feelgoods in The Lone Sharks as well as session vocals and voice coaching. At the same time Chris Aldridge took on the saxophone duties with a fresh and exciting dynamic sound, both adding their own dimensions to the musicians that have carried the flag for Climax as a unit for over 25 years, in Les’s case over 30 years, and George for nearly 40 years.