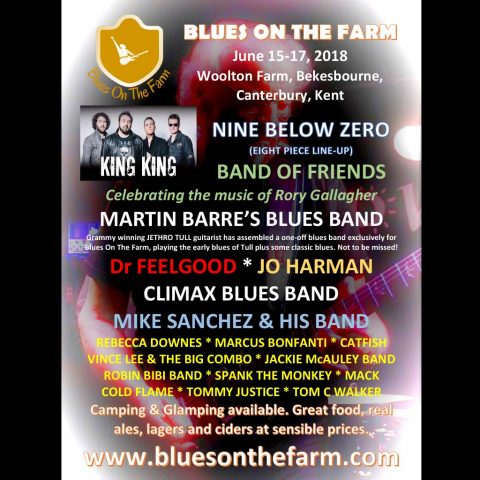 Climax Blues Band are delighted to announce that they will be playing at the Blues on the Farm on Sunday, June 17th, 2018

Yes, Climax Blues Band will be playing at the Blues on the Farm three day festival at Woolton Farm, Bekesbourne, Canterbury, Kent that takes place June 15 -17th 2018. Other bands include King King, Dr Feelgood, Nine Below Zero, Martin Barre’s Blues Band and many more. We hope that you will come out and see us on Sunday, June 17th!

This festival comes hard on the heels of the June 3rd Leicester Blues Festival show where we shared the bill with Walter Trout, Dr Feelgood and The Groundhogs. With such auspicious colleagues it was especially welcome to receive an email from Andy Taylor saying “Don’t know how to contact you to congratulate you on a great gig at Leicester on Sunday night. I’ve not seen you play before but you were definitely the best band of the night. Energy, musicianship, beautiful sound balance and original songs made it for me. Well done guys!!”

Hear New Material at the Blues on the Farm

Now you have a chance to hear some of the exciting new material off the Climax Blues Band new album scheduled for release later this year at the Blues on Farm Festival!